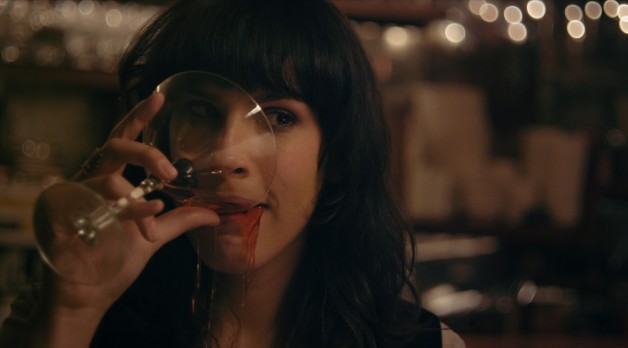 This essay originally appeared at TYCI as part of my Girls on Film series.

Amy Poehler and Tina Fey, as we all know, have a lot in common. Other than being everyone’s favourite comedy bffs, their careers have taken more or less parallel paths, starting out in the same improv groups and making their names on SNL. And in the late 2000s, both became synonymous with their leading sitcom roles – Parks and Recreation’s Leslie Knope and 30 Rock’s Liz Lemon. Those characters, too, have a lot in common: both are ambitious, successful women, defined first and foremost by their investment in their jobs, their competence as leaders, and their comfort in positions of power. Leslie, who starts out as a passionate civil servant, is unabashed in her political aspirations: “It is my dream to build a park that I one day visit with my White House staff on my birthday. And they say President Knope, this park is awesome. Now we understand why you’re the first female president of the United States.” Liz, the head writer of a popular sketch show, spends her life battling for control over her show and attempting to manage her difficult staff, unafraid of unpopularity. But in Poehler and Fey’s recent feature-length collaboration, Sisters, they’ve taken a very different route, playing directionless women who have little power over the direction of their own lives, let alone anything else. The shift coincides with the rise of a new archetype in mainstream comedy: I’m going to call her the woman-child, and she’s a character who says some interesting things about the ambivalent relationships between women and power that have been forged in the 21st century.

You’ve heard of the man-child, brought to the cultural imagination most famously by the ouevre of Judd Apatow but to be found in countless other boys’ comedy films. The man-child – directionless, immature and irresponsible, but also laidback, funny and endearing – has been a staple role for men in comedy for a long time now, and recently perhaps the staple role; his rise has been analysed through the lens of the ‘mancession’ and the crisis in masculinity, a symptom of the gradual erosion of traditional forms of male power. In contrast, female-centred pop culture in the 90s and 00s was, for a while, all about the idea of empowerment. Empowerment could mean high-powered careers and the wealth to live as you wanted, like the women of Sex and the City; it could mean intelligence and education and independent female-led families like the Gilmore Girls; it could mean literal super-strength and the power to save the world like Buffy or Xena; it could mean your standard rom-com heroine whose successful life is missing nothing but the love of a good man. But in the last few years, and particularly in comedy, there’s been a noticeable shift towards representations of women who are drifting, uncertain, irresponsible, unable to grasp power over themselves or the worlds around them. Women, in other words, who look a lot like the man-child.

The woman-child is Annie in Bridesmaids, Apatow’s 2011 foray into femme (upon whose release the world reeled at the revelation that Women Can Be Funny Too); she’s nearly every character in Girls and Broad City and, on this side of the pond, Channel 4 sitcom Drifters. She’s the star of Amy Schumer’s Trainwreck and countless mediocre alcohol-and-sex comedies like Bad Teacher and Young Adult and Say When. She’s at the centre of Noah Baumbach’s Frances Ha and Desiree Akhavan’s Appropriate Behaviour. (Like most people in the world, obviously, she tends to live in New York.) And she’s Fey and Poehler’s sisters, who quite literally regress to their childhood home for a nostalgic reenactment of their teenage years.

Of course, there have always been woman-children; the likes of Bridget Jones were never exactly the high-powered, has-it-all archetype of feminine success to which we’re meant to aspire. But their endearing incompetence at adulthood was always framed specifically as incompetence at feminine adulthood: it was an inability to snag a decent man; it was struggling to lose weight and frustration with absurd beauty ideals; it was the embarrassment of doing things that were clumsy and fumbling and not very ladylike. But in the recent evolution of the woman-child, she’s increasingly allowed to be incompetent and irresponsible in ways that are not directly related to her gender (or at least, not always). She is allowed to do the same kinds of things that man-children do – get drunk or high and sleep around and even look a bit of a mess without it being a cause for crisis and anguish; she’s allowed the eminently human traits of selfishness and uncertainty, and sometimes she’s allowed to be unlikeable. Maybe the woman-child is a symptom of women’s dissatisfaction and disappointment after empty promises of power and ‘having it all’; maybe she’s a symptom of general millennial discontent and disaffection. Or maybe she’s a symptom of nothing at all but the gradual realisation that women, too, are full and multifaceted human beings who can sometimes be irresponsible dickheads.

If adults find themselves increasingly childish, the question is, where are the parents? One of the reasons that the rise of the woman-child is something of a satisfying development is that she’s not defined by motherhood. Representations of female power have often been entangled with the idea of a specifically maternal power. One of the more insidious tropes of mainstream comedy has been the suggestion that women, not men, are the competent ones, the sensible ones, the only ones capable of raising the kids and running a household and holding down a job. It’s insidious because it can be sold as a kind of ‘empowerment’, a faux-feminist narrative of female superiority. But in the pop cultural milieu where women are empowered and men are boys, all women become mothers, not only of their own kids but of everyone around them. If the man-child is everywhere, there’s nearly always a woman-adult somewhere nearby – either as a nagging shrew who kills his vibe or as a sexy saviour who will look after him and make him a better person. Empowerment, it turns out, can sometimes really mean bearing all the weight of responsibility and expectation and uncompensated labour, which can sometimes feel like very little power at all.

Sisters features an interesting inversion of the maternal role: it’s Fey’s woman-child Kate – the flaky party girl who’s unable to hold down a job or a flat – who has a teenage daughter, while Poehler’s child-free Maura is the anxiety-ridden ‘party mom’ who looks after her friends instead of having fun and takes care of her niece when her sister can’t. (Even Maura, though, isn’t exactly an emblem of successful adulthood: “go and live your life and stop following us around,” her parents beg, exasperated at both daughters’ refusal to “take the fucking baton” of adulthood.) It’s something of a brave move to write an incompetent mother as a main character; if there’s anything women are still roundly despised for, it’s not adequately fulfilling their maternal duties, while men have always been allowed to be lazy and noncommittal ‘fun dads’ while remaining relatable.

Another recent woman-child film, Gillian Robespierre’s Obvious Child, takes the story of irresponsible womanhood and anti-maternalism to a place most comedies are too nervous to go. It’s a rare acknowledgement that, for many women, a carefree lifestyle and an aversion to responsibility is nonetheless underpinned by a more immediate fear than men have to contend with – the threat of unwanted pregnancy. It’s a forcible confrontation with the possibility of real responsibility and conscientious adulthood, the renunciation of full freedom, not just as an abstract idea but suddenly right there in your own body. In most films, freedom loses out of that confrontation: an accidental pregnancy is most often used as a narrative catalyst for someone to grow up, sort their life out, realise their own potential to become a responsible adult (think Knocked Up; think Juno.) I hadn’t read anything about Obvious Child before I started watching it, and even after Donna’s frank request that “I’d like an abortion, please,” I spent much of the film waiting for the change of heart – the gradual realisation that a baby might be just what she needs to give her life meaning, the falling for the father and keeping it for love, the sudden guilt in the face of fingernails. But Obvious Child, it turns out, is a rare creature: an honest and nuanced film about abortion, not as trauma or desperation or punishment but a choice as valid as any other. It makes space for ambivalence, anxiety and sadness, but insists that women have a right to refuse the responsibility of motherhood, to remain free and to do so without guilt or regret. Donna might not have much power in any of the traditional senses, in terms of career or money or influence, but power over what happens to your body is the vital foundation on which everything else must be built. And in comparison the sorted-out-life endings of most woman-child stories – Amy Schumer clearing out all her alcohol and getting back the guy, Kate discovering her “mom strength” and getting a job and a house, Maura finding a nice man and cutting the apron strings – there’s something quietly radical about a narrative where sensible adulthood isn’t the end goal, a story that leaves the precarity and uncertainty of life hanging unresolved.

The politics of responsibility, respectability and likeability aren’t just about gender, and it’s no coincidence that most mainstream woman-children are straight, white, and from well-off backgrounds (and that many of them have come under scrutiny for their issues with race). Like most things, the evolution of who’s allowed the freedom to misbehave is a slow one that’s still built on privilege and exclusion. It’s a lot easier to be carefree about the law and public perception when you’re not always-already considered criminal and irresponsible; Kate in Sisters might be able to casually deflect the cops’ attention with her tits, but as many recent events have starkly shown, a black woman might have a very different sense of her relation to the police. And it might be a new development for women to get away with not being perfect ideals of motherhood, but parents who aren’t straight still have to contend with intense pressure not to slip up or risk being considered unfit for parenthood. The power of positive representation – the Buffys and the Rory Gilmores and the Leslie Knopes – is one kind of feminist progress, but paradoxically, maybe real power is to be found at the point where you can be flawed and unlikeable and even obnoxious but still immensely popular. Maybe real power is about how much you can get away with.