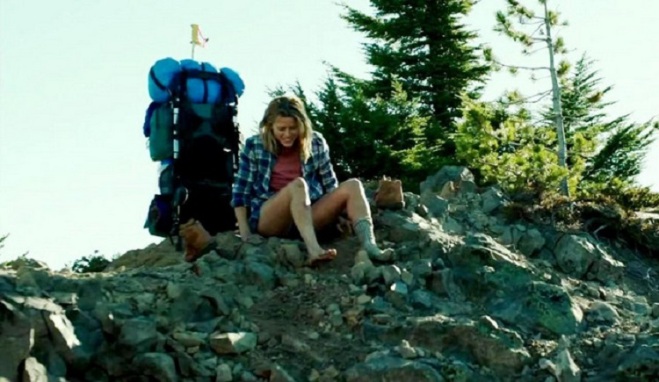 This essay originally appeared at TYCI as part of my Girls on Film series.

The best-known wilderness story of recent years is probably Sean Penn’s 2007 adaptation of Into the Wild, based on the life of Christopher McCandless, a man who left behind a comfortable life to survive in deepest Alaska. It’s a film with all the trappings of the classic back-to-nature narrative: McCandless’ journey is framed not just as a pursuit of adventure but of truth, authenticity, freedom from social expectation; his project of ascetic survival is a fierce rejection of society’s decadent excess. In a culture where successful life trajectories are expected to aim at ideals of security and stability – steady job, home ownership, family roots, accumulated possessions, loyalty to country and community – there has always been an understandable romantic appeal to the image of the solo traveller in a remote landscape, unconstrained by society’s structures.

But for all its anti-conventionalism this, like all stories, is structured by its own set of unacknowledged conventions. Littered with references to Tolstoy, Byron, Thoreau, Jack London and other writing men, McCandless’ pursuit of authentic experience is situated firmly (if unintentionally) in a tradition that is thoroughly masculine. Men who opt out of conventional life might scorn society’s markers of male success – wealth, power, status – but the footloose lifestyle and the challenge of wilderness survival have always been invested with their own kind of manly prestige. From countless stories about men on the road to the admiration of rugged self-sufficiency a la Bear Grylls, it’s fair to say our culture is in thrall to the idea of the male wanderer, cut free from the constraints of domesticity.

As others have pointed out, a story about a woman wandering is a much rarer creature (most of the time, girls only go wild in films of a very different genre). Jean-Marc Vallee’s Wild is a lot like Into the Wild in some ways, but in others it’s a very different kind of film. It’s based on a true story, too, but its source material is memoir rather than biography, the script developed from Cheryl Strayed’s own account of her experience trekking across America. They share a non-chronological structure; between scenes of Chris’ and Cheryl’s expeditions through a vast deserted landscape, we flit back and forth through encounters with people along the way, voiceover reflections and flashback memories of the old lives that have led them to this point. Those lives, though, are of markedly different kinds. Chris is the child of a wealthy (if dysfunctional) family, with an expensive education and a hefty trust fund that he gives away to pursue a rootless, self-sufficient life: “I don’t want things,” he insists when his parents try to buy him a car, and at one point in his journey literally burns a pile of money. Cheryl, in the glimpses we catch of her life, lives with her mother and brother in a cramped flat, both women working full-time as waitresses; later, after her mother’s death, she spirals into heroin addiction.

They are different lives too, of course, in their gendered experience. Looked at in comparison to its predecessor, Wild is testament to why telling women’s versions of traditionally male-centred stories isn’t just important as a box-ticking exercise in diversity, but can create a space for finding new and better versions of those stories, reinvigorating old genres with a sense of fresh perspective. The thing about a film like Into the Wild is that it doesn’t even really notice it’s a film about a man, about maleness, about the kind of self-mythologising adventures men have always written about; it regards itself, to an extent, as a universal story about timeless struggles between Man and Nature and Society. A film like Wild, though, cannot evade its own specificity. You can’t write about a woman trekking across America without taking note of the fact that she’s female, and the film doesn’t try to. If Christopher McCandless’ journey is situated in the history of Great Wandering Men, Cheryl’s is just as deliberately indebted to a female heritage: she travels with a collection of Adrienne Rich’s poetry, and in the books that mark each stage of the route, the quotes she leaves behind are largely women’s words, placed next to her own in an acknowledgement of her debt to them: Emily Dickinson and Cheryl Strayed; Joni Mitchell and Cheryl Strayed; Flannery O’Connor and Cheryl Strayed.

And importantly, Wild is a film with a sense of humour. Wilderness narratives, with all their beauty and awe, often slip with ease into the kind of philosophising that can become tediously po-faced. Christopher McCandless styles himself an “aesthetic voyager”, in pursuit of “ultimate freedom” and “spiritual revolution”. Cheryl Strayed’s journey seems a lot less lofty than that, more humble in its aims; in the telling, it resists the temptation to self-aggrandize, and makes space for the comic absurdities and the unexpected frustrations that such a journey entails. The romanticisation of homelessness is parodied when Cheryl is approached by a man who “writes articles about hobos for The Hobo Times”, excited to find her hitchhiking: “Let me tell you, lady hobos? Hard to find.” The wandering woman is seen not as an iconoclastic outcast but an oddity; her story is fodder not for the history books and the poets, but for curiosity pieces on pages that will soon be pulped.

In another comic scene, about to set out on the trail, she wrestles with a rucksack twice her size, the beginning of what will be an ongoing struggle between the limits of the body and the physical realities of walking. Like those other kind of films about girls going wild, this is a film obsessed with the body, but not in the obvious ways. The opening scene is painful to watch, brutally physical and at the same time mundane, a small bodily affliction that fills the screen: panting and moaning and pulling off her blood-soaked shoes and socks, the first thing we see of Cheryl Strayed is her ripping off a toenail. This wilderness isn’t all joyful running and swimming and hunting and howling; a lot of the time, it’s sheer painful slog, sweat, swearing; it’s an oversized rucksack and chafing boots, and all the other things that masculine portraits of heroic adventurers tend to leave out.

It’s not just the landscape that threatens the bodies that take on its challenge. Anybody can face danger from nature’s forces – can fall or get trapped or run out of water or, like Chris, eat the wrong thing and face fatal consequences. But for female bodies, existing alone in the wilderness comes with another threat: a lingering fear not of the isolated landscape, but of who might join you there. Cheryl finds herself alone with men in several moments of tense anxiety. Sitting in a truck with an old farmer intent on driving her to his house for a hot meal, she invents a husband as meagre self-protection; the man in question turns out to be harmless and kind, but later an encounter with two men whose friendliness is less innocent emphasises that such fears aren’t mere paranoia. Like Into the Wild, the film is built not just around the solo journey but around the fleeting human encounters that fill it. But it makes us acutely aware that the carefree ease of such encounters, the idea of meeting people as strangers on equal terms, is a privilege solo female travellers cannot enjoy so freely.

Any story about finding yourself in the wilderness and being “fixed” by nature runs the risk of moralising, and a story like this one – a woman who spirals out of control with drugs and casual sex, whose nadir of self-loathing and catalyst to change is located at the moment she finds out she’s pregnant and decides on an abortion – could very easily tip over into an unpleasantly gendered kind of narrative, a morality tale where the purity of nature and intense physical suffering is what it takes to redeem a fallen woman. But although Wild is a film written and directed by men, it’s mined from a woman’s voice, and one that gratifyingly resists that narrative. Near the end of the film, Reese Witherspoon’s voiceover quotes near-verbatim from Strayed’s memoir: “What if I wanted to sleep with every single one of those men? What if heroin taught me something? What if all those things I did were the things that got me here? What if I was never redeemed? What if I already was?” It takes a lot to walk across America as a lone woman, but maybe it takes even more to write about an ambiguous female life in such an unapologetic voice.